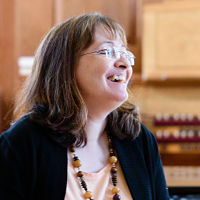 Sarah’s earliest musical studies began at the age of 7 as a young recorder student in her native England. She began playing the flute at the age of 12, two years after immigrating to the US with her family. As a college student, Sarah studied with Virginia Sindelar (a graduate of the Julliard School and student of Julius Baker). She pursued additional flute studies with Christopher Hyde Smith (of the Royal College of Music, London), with Lois Schaffer (formerly of the Boston Symphony Orchestra); also with Julius Baker as a participant in the Bowdoin College Summer Music Festival.

During her early career, Sarah played with the Plymouth Philharmonic, Quincy Symphony and Northeastern University orchestras.  She soloed regularly at roughly 15 different churches primarily on the South Shore, in the Worcester area, and also at Park Street Church and Cathedral of the Holy Cross in Boston.

Sarah still loves to play all of the Handel and Bach flute sonatas for self-entertainment, but no longer performs regularly due to the rather consuming demands of leading Pakachoag.