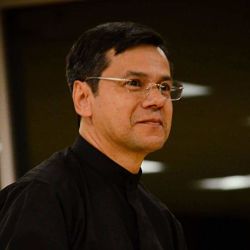 Dr. Luis Torres holds degrees in Music, Musicology, Educational Sciences and a diploma in Orchestral Conducting.  As a child, Luis studied music at the Jose Maria Rodriguez Conservatory in Cuenca, Ecuador studying both violin and piano.  At age fifteen, he presented his first musical composition.

Mr. Torres continued on in music as a student at the University of Azuay, Cunca, Ecuador where he completed a B.A. in Music, with violin as his primary instrument, and a Masters in Musicology.  His doctoral degree is in Education also completed in Ecuador.  He has pursued additional studies in conducting at Bard College Conservatory and NEC, and participated in master classes at the Moscow Conservatory.  He holds a Diploma in Orchestral Conducting completed under Spanish conductor Francisco Navarro Lara in partnership with the ABRSM (Associated Boards of the Royal Schools of Music) based in the UK.

Luis has taught violin for over 12 years with the Shrewsbury Public Schools.  He is a former violin, viola and piano teacher at Atlantic Union College.  He performs regularly with the New England Symphony Orchestra (formerly Thayer Symphony) since the year 2000.

In 1997, Dr. Torres wrote the score for the Ecuadorian film “El Exodus of Yangana” which received recognition for its musical film score at Cuba’s Latin Film Festival.

From 1991 to 1994, Dr. Torres served as Musical Director for the Ibero-American Song Festival; and from 1998 to 2000, Dr. Torres was invited by the Embassy of Ecuador to participate in an annual celebration of Ecuadorian culture and music at the Kennedy Center.

Dr. Torres has served as conductor and guest conductor for a wide range of orchestras from Washington, DC to Ecuador to Moscow, as well as locally for colleges, including UMass Amherst, and at the middle and high school level.

Many of his compositions have earned national awards and have been performed in Washington DC, Philadelphia, Cuba, El Salvador, Honduras, Paraguay, Uruguay, Lithuania, Egypt, Turkey and Ecuador.  His compositions and arrangements are featured on more than 20 compact disc recordings.